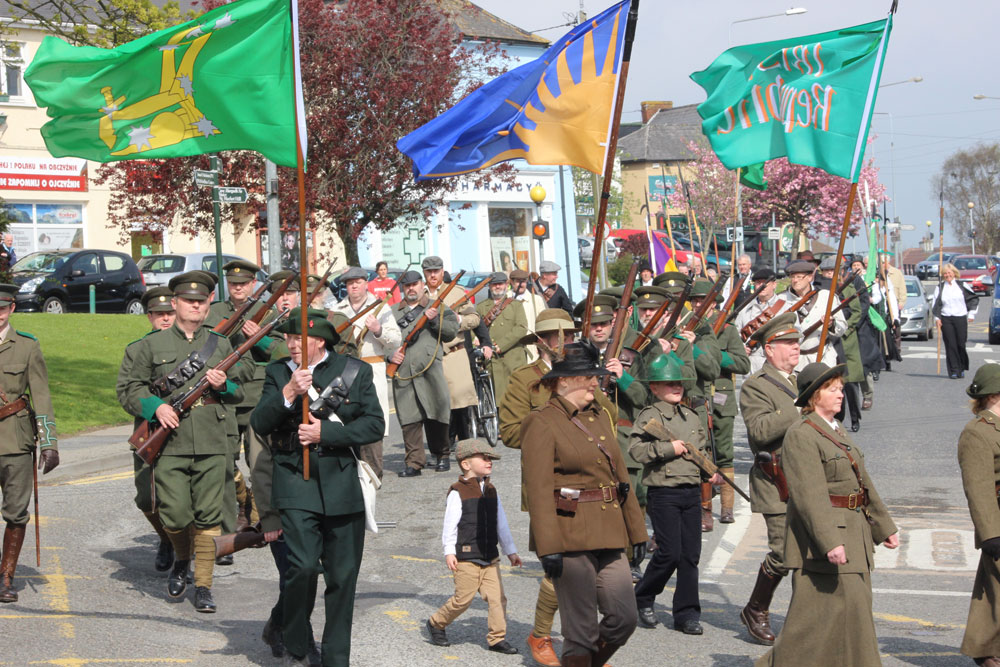 1916 Easter Rising In Ennsicorthy
Enniscorthy is set to host a unique spectacle as part of its 1916 Centenary Celebrations on Easter Monday March the 28th. The town will witness Ireland’s largest battle re-enactment as hundreds of re-enactors equipped with vintage weapons , uniforms, equipment and vehicles will converge in Abbey Square to recreate the historic significance of Enniscorthy role in the 1916 rising.
County Wexford, like most of Ireland in 1916, was dominated politically by the Irish Parliamentary Party and it auxiliary the Ancient Order of Hibernians. The one exception to this was Enniscorthy, which had a nucleus of separatist activists. There was a strong Irish Republican Brotherhood presence in the town and in the local Volunteers. One local IRB man, James Cullen, recalled the revitalisation of ‘The Organisation’ in the town after 1907, led by a man named Larry De Lacey. With the aid of old Fenians of the 1867 generation, one of whom, Charlie Farrell, was known to say, “Ireland will never be free until Enniscorthy and every other Irish town runs red with blood”, they recruited men carefully, selecting only those, “we knew held extreme national views”.
To celebrate those daring men that bleeded red the town has left no stone unturned in paying their respects and remembering one of its most historical battle. Enniscorthy have always been traditionally a proud town to host the commemorating celebrations of the 1916 rising and this is year is no exception with a line of wonderful events on the day.

Timetable of Enniscorthy Easter Monday 2016 – State Ceremony Programme
Prelude
10:00 -1916 Centenary Commemoration Mass in St Aidan’s Cathedral
10-11:15 – Commissioned video pieces will be displayed on large screens in Abbey square (Bandages and Bullets and 1916 Stories)
11:30 – 1916 Centenary Parade from St Aidan’s Cathedral to Abbey Square.
Ceremony Begins
12:40 -Introduction to the state Commemoration by M.C. welcoming remarks by Cllr. Paddy Kavanagh, Cathaoirleach, Enniscorthy Municipal District.
Followed by keynote address by representative of the Irish government.
13:00 – MC to set our ceremonial elements.
13:03- Reading of the Proclaim of 1916 by a member of the defence forces.
Wreath Laying Ceremony
13:10 – One on behalf of the Irish government
One on behalf of the people of County Wexford
A minute’s silence
A lone pipers lament
The last post played by a bugler from the defence forces
Raising of the National Flag by the defence forces
Reveille played by a bugler from the defence forces
The national Anthem played by the military band with an Aer Corps Fly Past
Post Ceremony
13:40 -Musical performance from the County Wexford 1916 Songs Project
14:00- Recital of the specially commissioned County Wexford 1916 Poem
14:10 –Introduction to the 1916 Battle Re-enactment
14:30- 1916 Battle Re –enactment commences
15:15- Event concludes