You are here:
January 9, 2017Uncategorized 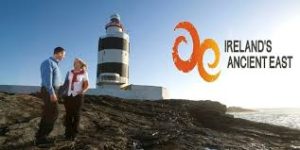 The tracks, trails, and most importantly tales of Ireland’s Ancient East are prevalent at every turn in historic County Wexford. This most southeasterly corner of Ireland boasts history like no other part of the country; the entry point for Ireland’s first settlers is teeming with riches and treasures waiting to be explored. It is thought that the arrival of the first humans to Ireland was to County Wexford in the Mesolithic period between 5000 BC – 3000 BC. Age-old Portal Tombs known as ‘Dolmens’ can be found across the county along with many artefacts from the later Bronze Age. Heritage runs deep in Wexford; exploring this Cornerstone of Ireland’s Ancient East and journeying through the unspoiled landscape, hearing first-hand the stories that built Ireland is a must. Meet our ancestors – Celts, Christians, Vikings, Normans, French, Welsh and English – who have left us a remarkable heritage, unrivalled anywhere else in Ireland.

Vikings certainly made their mark in Wexford. Bearing down from Scandinavia, these hordes of wild wayfarers first arrived in the 8th century to loot and pillage. But we’ve a lot to thank them for too. They laid the foundations of many Irish towns including Wexford Town, which was founded by the Vikings in about 800 AD. They named it Veisafjǫrðr meaning ‘inlet of the mud flats’ and it remained a Viking town for about 300 years! In 1169 the Normans first arrived in Ireland at Bannow Bay in Wexford. Diarmuid McMurrough, the High King of Leinster (whose seat was located in the village of Ferns, Wexford) and his Norman allies battled the Viking inhabitants who resisted fiercely until the Bishop of Ferns persuaded them to accept a settlement with King Diarmuid. Today, Norse and Norman influences combine in Wexford, a town that has retained its compact, medieval feel – though the only invading hordes you’re likely to encounter these days are the opera buffs descending on the annual international Wexford Festival Opera. The Norman town of New Ross, heritage town of Enniscorthy, and bustling Gorey all combine to provide a historic trail with fascinating visitor attractions, beautiful coastline and everything you need to enjoy your visit.

Presuming you are travelling by car rather than by longboat, the routes connecting the highlights of the Cornerstone of Ireland make for some great driving trips, ranging from the towns themselves to the rivers, beaches, festivals, castles, forts, abbeys and cafés in-between!

We look forward to welcoming you to Wexford – the Cornerstone of Ireland’s Ancient East!