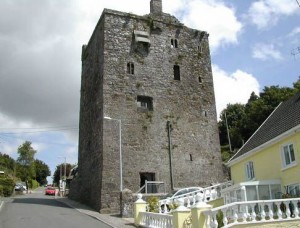 Ballyhack Castle is located on a steep slope in a commanding position overlooking Waterford Estuary. The castle, a large Tower House, is thought to have been built c. 1450 by the Knights Hospitallers of St. John, one of the two great Military Orders founded at the beginning of the 12th Century at the time of the Crusades.

The present day 5 storey Castle is 15th Century in date and probably has nothing to do with the Knights.  The ground floor is vaulted and has a number of deep recesses, and the second floor is also vaulted.

There are also a number of recesses on the third storey; that on the East Wall was once a Chapel. On the same floor is now an inaccessible prisoner’s cell. An amount of 17th century pottery was found during conservation work in the Castle.