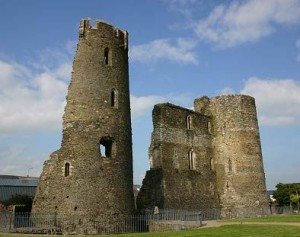 Ferns Castle was built in the 13th Century, possibly by William The Earl Marshall, originally the Castle formed a square with large corner Towers. Only half the Castle now remains. The most complete Tower contains a fine Circular Chapel, with Carved Ornament. The Tower also has several original fireplaces and a vaulted basement Archaeological excavation revealed a rock-cut ditch outside the Castle Walls. Today, Ferns Castle is a state care and facilities include Visitor Centre housing the Ferns Tapestry, which depicts the History of the Village of Ferns.