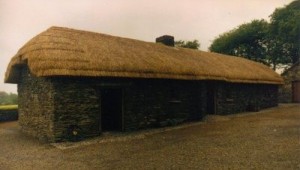 For most of the 14 years that Fr. John Murphy was a curate in Boolavogue he lived with John O’Donohoe and his family in this house in Tomnaboley, Boolavogue.  That house was destroyed in the rebellion and rebuilt afterwards.  It was used until the late 19th Century and then fell into disrepair.  It was restored as part of the commemoration of the bicentennial of the rebellion in 1998.

It is situated in a restored farmyard which includes a cowhouse, pigsty, dairy, stable and labourer’s lodge.

The haggard, beside the farmyard, contains a range of farm machinery, ploughs, harrows and sowers from the 19th and 20th Century.  Some of them were made in Wexford, in Pierce’s in the Star Engineering Works and in Thompsons.

The sheds have examples of hand tools used in farming in bygone days.

The Fr. Murphy Centre closes for the winter and re-opens around Easter.

However, private or group visits can be arranged but must be booked in at least a week in advance during the closed season.