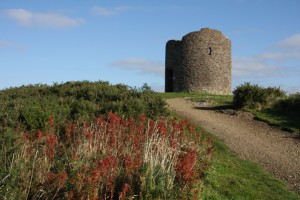 Once the rebellion in the counties of Antrim and Down were suppressed by the Crown Forces under the leadership of General Lake, he then wanted to bring the rebellion in County Wexford to an abrupt end. Meanwhile in the previous weeks the rebel army had experienced some major defeats at the battles of Newtownbarry (Bunclody), New Ross and Arklow, they then regrouped at Vinegar Hill and this was where General Lake and his forces would meet the rebels for the decisive battle.

The well trained and equipped Crown Forces were ordered by Lake to surround the rebels on all sides and prevent any escape, however by nightfall on the 20th of June, General Needham who was to be positioned on the southern slope of Vinegar Hill had not yet arrived. Lakes forces numbered approximately 10,000 men fully equipped with muskets and artillery while the rebel army numbered approximately the same however they were mainly armed with melee weapons such as pikes. To make matters worse for the rebels, Edward Roche and re-enforcements from Wexford town had not yet returned and approximately 15,000 civilians and family members of the rebels sought refuge at Vinegar Hill.