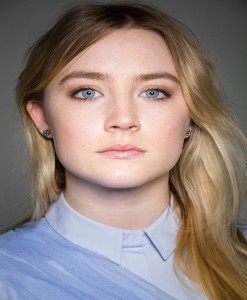 Born in The Bronx, in New York City, Ronan is the only child of Irish parents Monica (née Brennan) and Paul Ronan, who were living in New York City at the time. Her father is also an actor, and her mother had acted as a child. Ronan was raised in County Carlow, Ireland, having moved there when she was three years old, before moving to Howth, County Dublin as a teen. Saoirse is an Irish-American actress. She came to international prominence in 2007 after co-starring as Briony Tallis in the film Atonement, for which she received nominations for the Academy Award for Best Supporting Actress, the BAFTA Award for Best Actress in a Supporting Role and the Golden Globe Award for Best Supporting Actress, making her one of the youngest actresses to receive an Oscar nomination. She also starred in Peter Jackson’s The Lovely Bones (2009) for which she was awarded a Critics’ Choice Award, a Saturn Award, and a BAFTA Award nomination for Best Actress in a Leading Role. For her role as Eilis Lacey in John Crowley’s romantic drama Brooklyn (2015), she has earned Academy Award, BAFTA, Golden Globe, and SAG nominations for Best Actress.
Being Irish Saoirse Ronan was the Perfect choice for Brooklyn’s Lead Ellis. We don’t think anybody body would have to tell anybody how beautiful she looks as she was absolutely phenomenal and it made the film phenomenal. Saoirse Ronan’s Ellis shows us how being torn apart by the joys of a newfound life and the nostalgic pull of our native home Enniscorthy ‘will make you want to die, but it won’t kill you.
Read more about Saoirse Ronan role in Brooklyn here at: https://filmandnuance.wordpress.com/2015/12/22/brooklyn-review-a-star-is-born-saoirse-ronan-captivated-us-all/“>